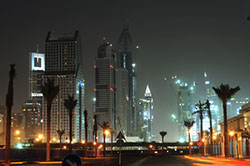 Many reputable consulting companies claim that in 2013 would be the significant price increase in all segments of the real estate market in Dubai.

In the past, in 2012, the number of transactions in this investment segment has increased by 65%. And experts predict the further increase, linking it with the gradual economic recovery. Dubai Land Department has not released official figures for 2012 yet, but the year before, in 2011, total transactions amounted to an impressive figure of $ 39 billion.

According to experts, the most popular in the previous year have been the areas having favorable location, good infrastructure and the high level of service. The most rapid real estate prices growth was observed in Dubai. According to the research of the independent consulting firm in 2012, the growth of the real estate prices ranged from 7% to 19%, which was dependent on the location and quality of the properties. But on the background of the economic recovery, experts predict the increase in the properties value in other area as well. Throughout the 2013 the sustainable positive properties price growth would be seen.

Property prices in Dubai in 2012 were steadily increasing every quarter. And, of course, in 2013, investors expect to receive the profits from this growth and will continue to increase the number of transactions. However, as experts warn, it must be clearly understood, in which projects which areas of Dubai are best to invest the money.
According to the agency Emirates 24/7, in 2013 prices growth would be in the segment of the upscale villas. In addition, the popular among investors of Dubai, the properties in the areas of Dubai Marina, Palm Jumeirah, Downtown Dubai and Emirates Hills would remain in steady growth and demand.
In the sector of the commercial real estate in 2013 it is projected to see some rise in the rentals in the areas in Dubai such as Tecom, Dubai International Financial Centre and Downtown Dubai. In the areas which are less popular the noticeable prices increase is not expected.

Real estate in the UAE is becoming increasingly popular due to three reasons:

The combination of these factors, according to the experts, will make the Dubai and the UAE as the whole in the year 2013 as one of the most attractive areas for the real estate investment.

Experts from Dubai Statistics research Centre say that the number of people who came to Dubai in 2013 will go up by another 10%. The report of the Bank of AmericaMerrill Lynch predicts that by 2020 the number of tourists will increase to 15 million annually. And of course, all of this information is driving demand for the property in the UAE, as investors rush to invest today, hoping in the future to receive significant dividends.

Transparency – the key to success

The property market in Dubai is considered to be one of the most regulated markets in the world. Such meticulous attitude of the authorities shall guarantee the investors the safety and reliability of real estate transactions. The more transparent the market, the greater the level of confidence of customers coming to such market. And, of course, this approach only plays into the hands of all interested parties, which stimulates the further economic activity.

Another articles for this month